The risk of this page is it will quickly become out of date as this is an extremely active area.

Keep Up to Date  - News Feed at http://stocknetwork.com/yukon_mining (DEAD?)

On a risk/reward assessment the entire market cap for key explorers in Yukon is now below $1bn, whereas at peak Atac alone reached this valuation.
Buying in the off-season before drilling might pay reward here. But in a bad market these are the riskiest plays.
Please ensure your own full update and due diligence before acting on anything you read here.

Introduction
The discoveries made by Underworld Resources in 2009, (and since acquired by Kinross), have sparked an enormous surge of modern exploration, further discoveries and speculation in the Yukon, Canada, targeting the hard-rock sources of gold historically panned and placer mined in rivers and creeks across the region in the first Yukon Goldrush.
An excellent article overviewing "The Second Yukon Goldrush"
at Resourceworld Magazine September 2011.

A Recent Mineweb review of "Yukon Companies with Cash to Burn" - May 2012 - Companies are all covered in some detail below.

These discoveries have not been made suddenly.

The story of Shawn Ryan's years of commitment to  prospecting across the region demonstrates impressive sacrifice and subsequent rewards. This has become front page news on the NY Times just as the associated stocks were running to a peak, a lesson !
NY Times Article - Gold Mania in the Yukon
For Up to date articles watch Golden Predator media page

Though a less media friendly story the Archer Cathero group spent years assembling masses of data across the region and found heavy investment from the resource investing legend Rick Rule.

Another mining leader, Bill Sherriff, identified the Yukon early and established his Predator group there. They have gone on to stake very large land packages.

As the staking and company formation has increased a classic "Area Play" has evolved.
The excellent Hard Rock Advisory has produced significant public review here.
(Very sadly David Coffin, one of the brothers writing the HRA, passed away on 17th February 2012, RIP)
Read the excellent
HRA Report - Gold in the Yukon - The Return of the Area Play
(written Sept 2010 ). This discusses the likely cycle of "Early adopters", "Also rans", and "weeding out". The identification of companies holding core claims will be important. Watch for the companies which are cashed up and those that have to go to the market on weakness.


The new exploration companies have also attracted the full complement of stock promoters with all that they bring.
Beware of the pumps; ultimately I do think the Yukon exploration efforts will develop an enormous new gold mining centre over the next decade but fortunes will be made and lost through the drilling and fund-raising cycles.
A number of these "touts" do not mention specific companies, or offer further paid reports. I would say the companies will be on this page, or at the stockgumshoe links. These letters are often promoting some of the "stronger" stocks so I wouldn't dismiss them but you shouldn't need to pay for them.
Here Greg McCoach, a promoter
Luke Burgess
Stock Gumshoe on Matt Badiali Picks

Trading Exploration Stocks - Esp Yukon
As some large promotional groups are active so there can be a lot of activity in the shares which moves them considerably as large numbers are promoted into these stock stories.
Some of these companies, the promoted too, will make large discoveries in the coming years. Investment and speculative success will depend on a long term view, buying a basket when out of favour, and perhaps selling some into strength to build liquidity to expand your core at opportune moments. "Embrace volatility" as Rick Rule and other experienced heads suggest. Buying the news will probably hurt badly here, but a big discovery will build over time.
None, even the best, will go straight up, even if you buy and hold your fellow stock buyers and sellers are some of the most fast moving and speculative in the world. Drawdowns are painful even if you think that you are invested for the longer haul.
So much drilling brings failure to meet expectation and again good stocks can go on sale.
On the other hand one great hole, a second, a third, can see dramatic moves.

Gene Arensburg's "Got Gold Report" follows quite a lot of the Yukon stocks and aims to trade out strength and "Vulture Pick" bargains. A late 2010 article on the Yukon Area Play.


The Yukon brings particular issues for the investor or speculator.
I shall attempt to review some of the companies involved by "provenance", where the claims came from, flagging the general region / "near-ology" (see maps) and promoters of the stock.
As some of these companies move into a 3rd and 4th year of drilling and exploration two views can be taken of the "older" companies.
a) Are they "past it", haven't found anything and never will. Some of the company names who had Yukon projects and may appear in these lists are already moving on. Outside of the main "provenance" lists take special care to understand details of the company and their projects. Some of these micro-caps may still move dramatically however.
b) Are the older companies finally coming to understand, though soil sampling etc, what they have and where to drill, will 2012 bring the success hoped for in 2009/10/11? The older companies should have secured the best claims, before the also-rans followed along. 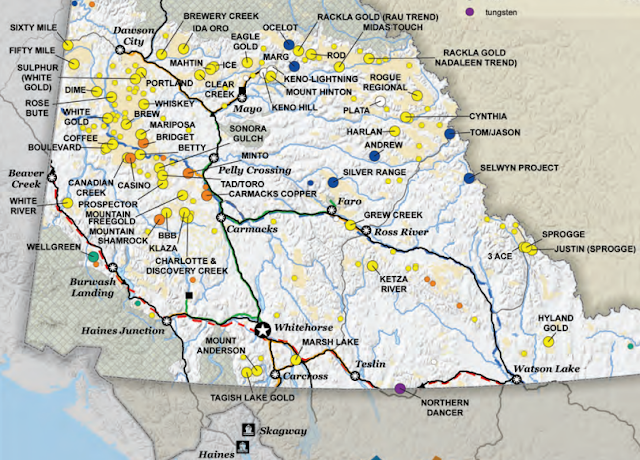 For another Yukon exploration list, see the Yukon government exploration companies list here
Lots of other info there too. 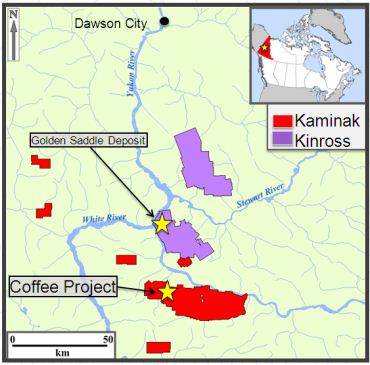 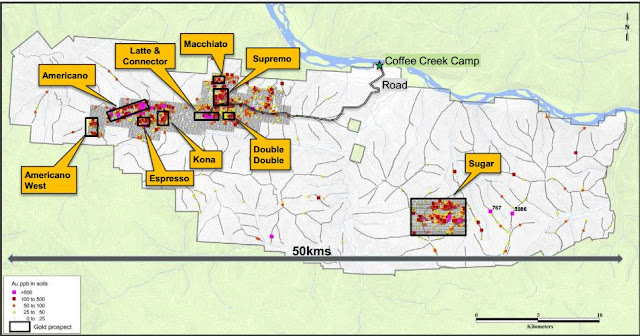 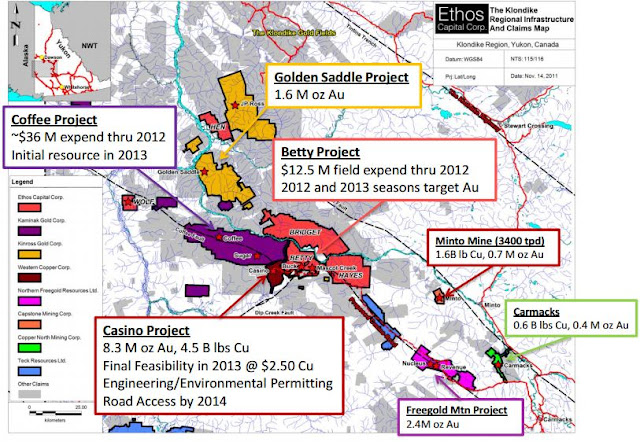 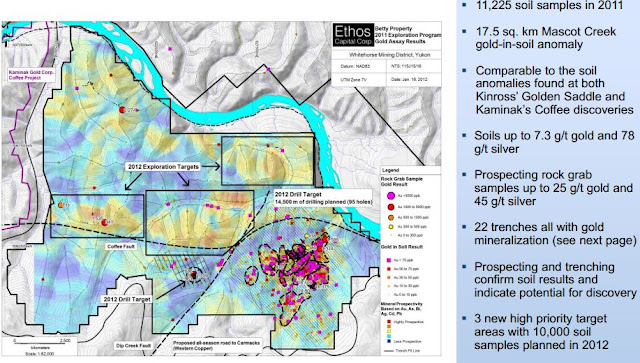 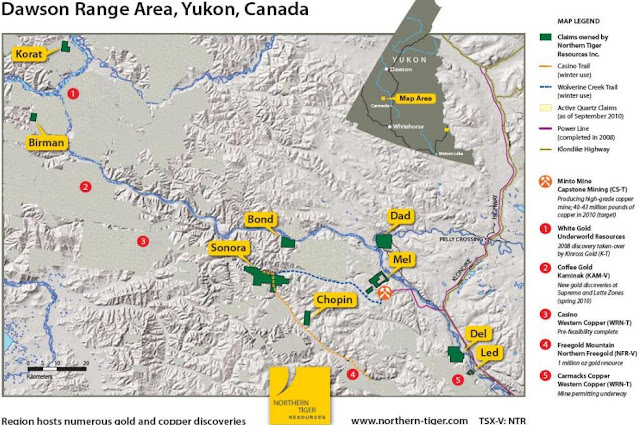 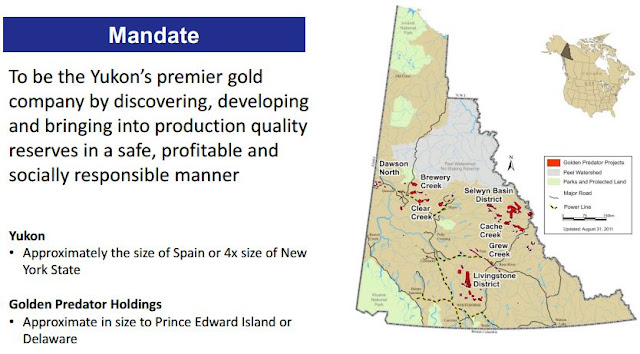 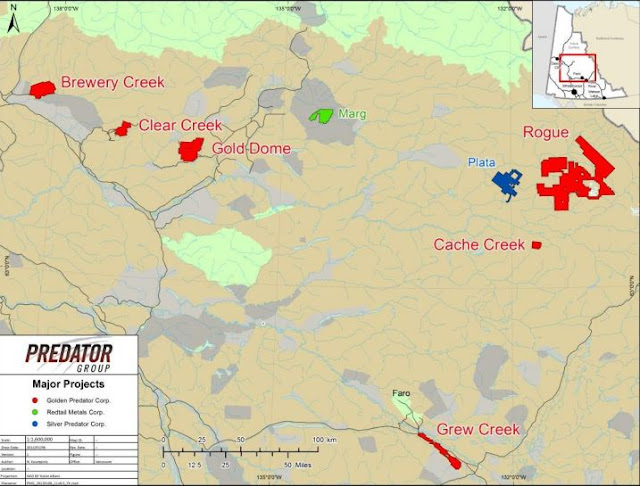 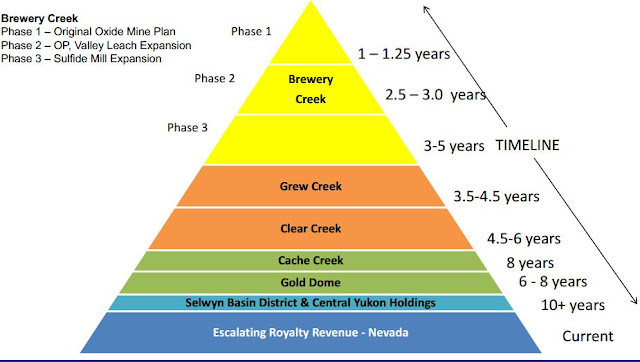 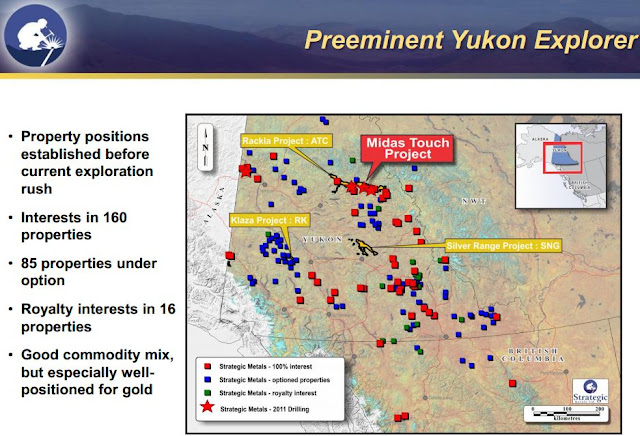 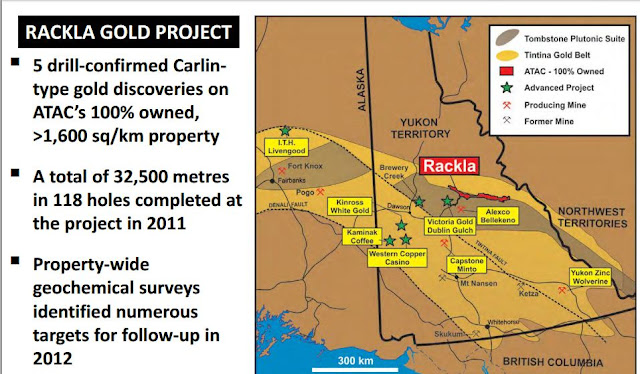 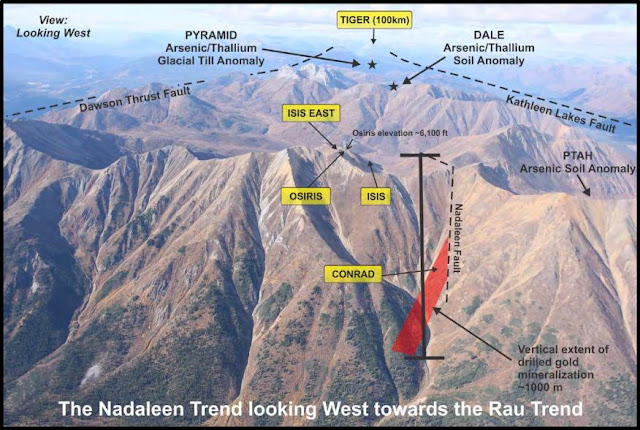 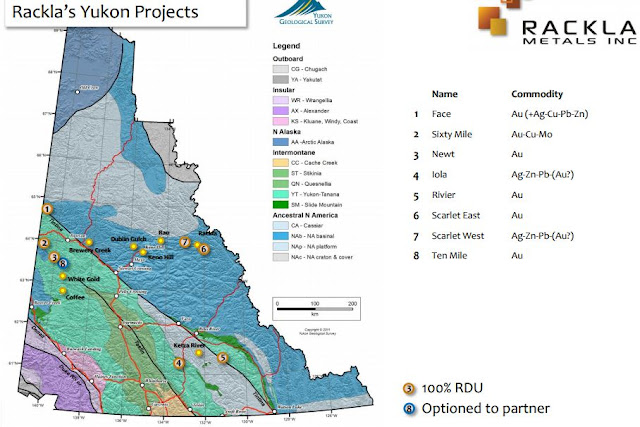 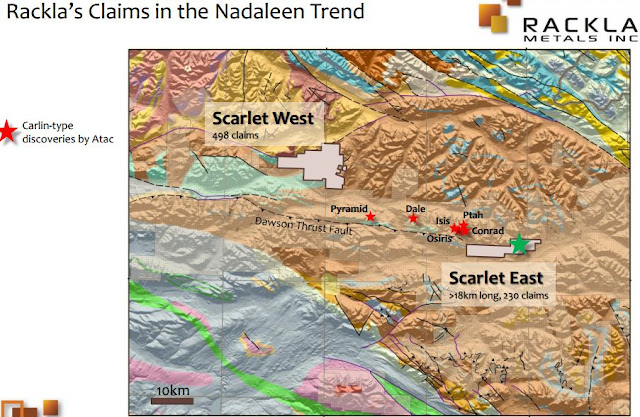 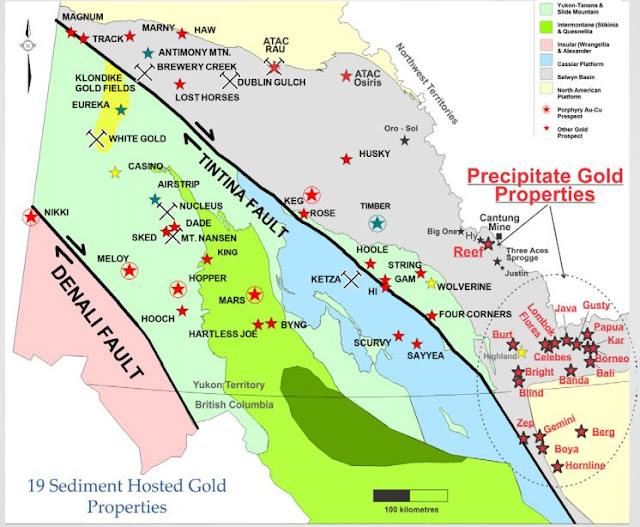 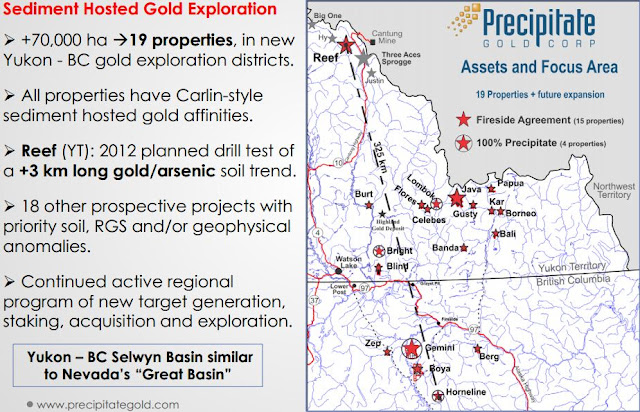 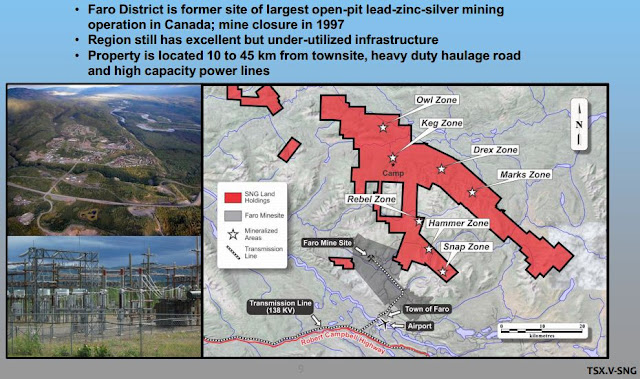 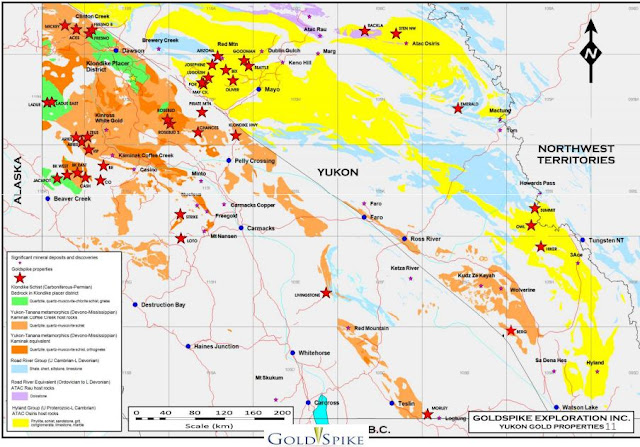 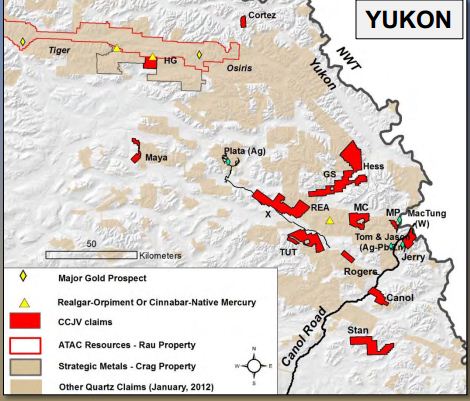 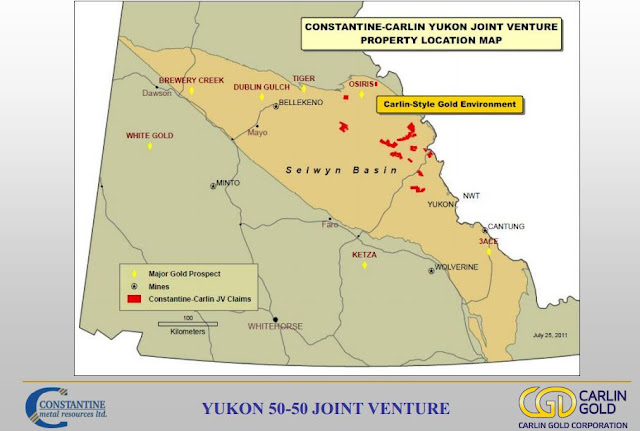 Posted by Goldmineseeker@gmail.com at Thursday, February 23, 2012