We seek to Identify The Emerging Juniors who are aggressively consolidating multiple development and production growth projects as some of the most powerful investment cases in a bull market.

Who are the best management teams creating growth companies against the background of a secular bull gold price.
The end of this bull market would see these growth leaders idolised and over-valued.

Are these currently the strongest stocks, or do they appear over-stretched and marked down by the market? Acquiring company prices can be punished if the (short termist?) market does not agree with the direction taken. Eldorado for example has been a high flying growth gold company but as at Feb-12 is valued near it's annual lows after announcing the European Gold acquisition. At the same point Argonaut looks to be trading near its highs as the growth objectives see progress.

Often one great mine can fund dramatic growth for a company if the management team is ambitious and capable and if the market wants growth, which it usually does, (especially near the top!)
True Capability in depth may be hard to find during a bull market which followed a devastating commodity down-cycle during the 1990's, any combinations will have to bring a number of quality teams together, as one development is completed core mine-building teams can move onto the next.

Whilst a financially backed / hedge-fund manager backed vehicle may emerge it will need enormous mining experience in key positions.
However Hedge-fund figures like Thomas Kaplan are joining the boards of some juniors, e.g. Novagold.
Is this for more than quick-flip investments?

Or have the big money been and gone? Jim Sinclair used to discuss the well connected Carlyle Group as very involved in this space through hedging deals.
I have seen little about this lately; are the deals in position to reap continued benefits or is the fact that most miners are now unhedged evidence that these early investors have been paid by the mining industry to buy out of the hedge-contracts? I struggle to see the end of the gold bull market without a blow-off in the miners.

Robert Gallagher, Director at New Gold gave a great interview in Feb-2010 on Mineweb discussing these themes for growth mid-tier producers, New Gold's share price has moved from $4 to $14 and back to $12 since then. I quote, my re-ordering, my emphasis,


"Emerging mid tier gold producers by far represent the best investment opportunities. Right now this space is more or less empty as previous intermediate gold companies have moved on to become major mining companies. The most recent examples would be Kinross and Agnico Gold Eagle. And Goldcorp and Barrick Gold are great past examples."

Gallagher concedes that his company still has a long way to go before reaching the much-envied status of a well-established mid-tier producer, which represents the Holy Grail for all emerging gold producers. That's because the mid-tier status offers major strategic and competitive advantages, he says.

"By comparison, large gold companies seem to struggle to maintain production and to maintain their reserve base. Also, smaller companies generally are not of much interest to most investors due to a lack of liquidity. So, where growth and value are best offered is in that intermediate space where you can continue to grow."

exponential growth is resonating very favourably with the investment community.

"Our share price has doubled since our transaction with Western Goldfields. So our financial ratios have gotten much, much stronger which means that there are a much broader number of potential targets that we can acquire," Gallagher recently told BNWnews.ca

"Growth is good as bigger companies tend to receive better valuations than smaller companies but the real growth comes when you can acquire an undervalued asset. So your growth on a per share basis is accretive (it acquires greater value per share). That's what we're targeting. And we accomplished that in a huge way with Western Goldfields. But we'll continue to pursue other opportunities out there when we find the right assets."

Ultimately a large number of miners and mining groups are predator and prey in a game of acquisition pacman, big fish eaten by bigger fish.
An interesting graphic from an Avion presentation, below, shows the valuation benefits of growth, although of course the company valuations are discounting future growth not just current production.
(As an aside - The stand-out here for low valuation is serial-disappointer Golden Star, I am going to add a high production low valuation page for potential turnarounds. If the gold price accelerates enough even the high cost low profit producers would become profitable with high volume producers benefiting most. 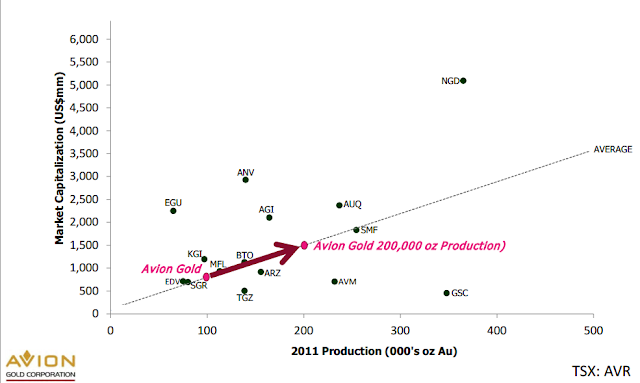 The Larger Miners
- Mostly struggling to sustain current resources rather than positioning as growth companies. Referenced here as examples of companies growing on a core asset base.
Emerging Larger Mid-Tier Groups - Building Strong Growth onto current production core
There are many potential contenders in this space, as companies enter profitable growth they may turn to acquisitions for further growth. I emphasise the companies who have shown an acquisitive streak to date or have "big" management teams who have travelled that path before.

Smaller Mid-Tier
- I find this smaller market cap growth sector of most interest for investment.
Again a number of other established producers might become contenders but may not have shown an acquisitive inclination to date.
Small-Cap