While some gold junior explorers receive investments from one "Major" Gold company others have established themselves under a "Project Generator" model.

This allows the prospect generator company to leverage geological and exploration expertise over many projects but avoid continual stock dilution as more exploration expenditure is incurred. The joint venture funds most of the exploration and "earns in" to the project.

The downside is that the full interest in a successful project may be lost but there are many examples below of companies taking on the full project in some circumstances, perhaps when they think that they have found something special.
The projects are probably for sale at the right price and will be developed until that can be achieved and then the team may move onto other projects held by the company creating a spin off hoping to repeat the same success from exploration. Recent examples have been Auex selling out to Fronteer creating Renaissance as the spin out and Fronteer then selling the project on to Newmont with Pilot Gold as the spin out. International Tower Hill is still a stand alone developer but many of its other exploration properties were put into the Corvus spin out. See the page Good People - Good Projects about the people involved in these successes.

Global Mining Observer Article
An April 2012 summary of the prospect generator rationale by Brent Cook.
A good if dated article on prospect generators -
And one here on Lara exploration website by Brent Cook. Again dated, especially market caps etc. Some big bounces from that article in April 2009 which shows the quality and success of these companies.
And here by Brent Cook from Paul Van Eeden - from 2009 reviewing companies which went on to do very well.
Another Blog on Prospect Generators
A Brien Lundin Goldnewsletter interview with 5 Prospect Generators October 2013
Ex Sprott Broker Luke Smith's Blog - Prosperous Adventure and Youtube Channel 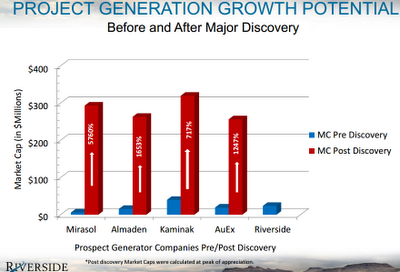 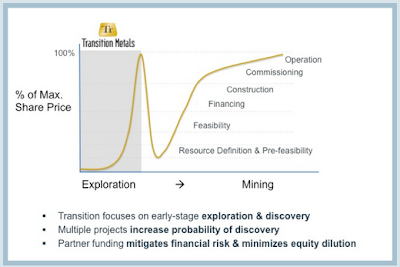 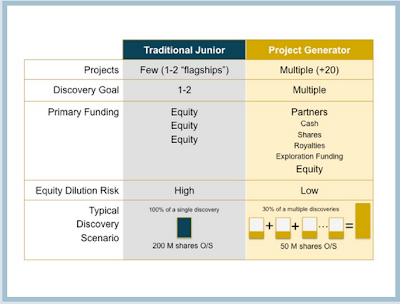